Posted by spectrum physio at 4:48 AM No comments:

Fall from the stairs while climbing down

Posted by spectrum physio at 3:30 AM No comments:

Posted by spectrum physio at 12:12 PM No comments:

Posted by spectrum physio at 12:11 PM No comments:

Posted by spectrum physio at 12:10 PM No comments:

Posted by spectrum physio at 12:10 PM No comments:

All injuries are not the same .
The bio mechanisms plays a major role
Posted by spectrum physio at 11:15 AM No comments: 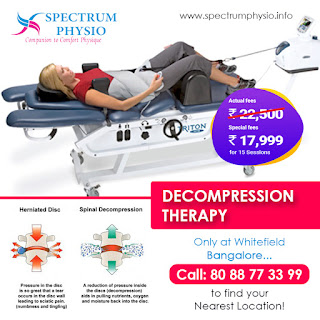 Long hours of sitting in front of the computer and holding the smart phone for more than 20 min continuously will lead to stress to the muscles ..
If this is ignored and persisted with nagging discomfort will lead to changing in Bio mechanical and pathomechanical alignments causing pain and degeneration .

For long standing chronic pain and Sciatica now the distraction force created in this De compression traction causes more healing rate to the disc .
With the decompression when the load bearing is monitored by the muscle length and strength by our team of physiotherapists has given very good recovery we can stay away from surgery for the certain type of Lumbar and Cervical disc issues .
http://www.spectrumphysio.info/blog/
Posted by spectrum physio at 2:21 AM No comments:

RETURN TO SPORT AFTER ACL INJURY

ROLE OF PHYSIOTHERAPY IN CONSERVATIVE MANAGEMENT OF SLAP LESION

A SLAP tear or SLAP lesion is an injury to the glenoid labrum (fibrocartilaginous rim attached around the margin of the glenoid cavity). Tear of the superior labrum near to the origin of the long head of biceps means where this one of the tendon of biceps having attachment were first described among throwing athletes by Andrews in 1985. The label of ‘SLAP’, an abbreviation for superior labrum anterior and posterior, was coined by Snyder et al, who went on to create a classification system for these lesions.
An unstable shoulder joint can be the cause or the result of a labral tear. Injuries to the labrum are common and can cause a great deal of pain and may make it hard to move your arm. A labral tear can occur from a fall or from repetitive work activities or sports that require you to use your arms raised above your head (Overhead activity). Injuries to the superior labrum can be caused by acute trauma or by repetitive shoulder motion. The symptoms be like Deep aching pain, Popping, clicking, catching, locking or grinding in the shoulder, Inability to lie on the affected shoulder and pain while lifting the arm or object.
Role of physiotherapy
Physical therapy is the best non- operative treatment, Physical therapist is specialized to treat SLAP tear via conservative methods because SLAP lesion poses a significant challenge to the physical therapist due to its complex nature and wide variety of causative factors associated with these lesions. A thorough clinical evaluation and proper identification of the extent of labral injury is important in order to determine the treatment.
In SLAP lesion the Clinical examination revealed the Faulty posture of the shoulder, rounder shoulders, scapular dyskinesia (abnormal movement of shoulder blades during shoulder movement), Tenderness on the shoulder joint and upper arm, Trigger points over the scapular region, Decreased range of motion of shoulder, Weakness of scapular stabilization muscles. The exercise program is based on the extend of injury and the symptoms.
Marc – Andre Blanchette et, al study reported that conservative treatment to the slap lesion might provide an optimal recovery with a return to sports activities at the previous level or higher.
A recent study is showing the conservative, or non-operative, treatment of superior labral tears results in improvements in pain relief, shoulder function, and overall quality of life via the exercises i.e., scapular stability exercise, range of motion exercise, strengthening exercise etc,.
SCAPULA STABILIZATION EXERCISES
Posted by spectrum physio at 12:14 PM No comments: